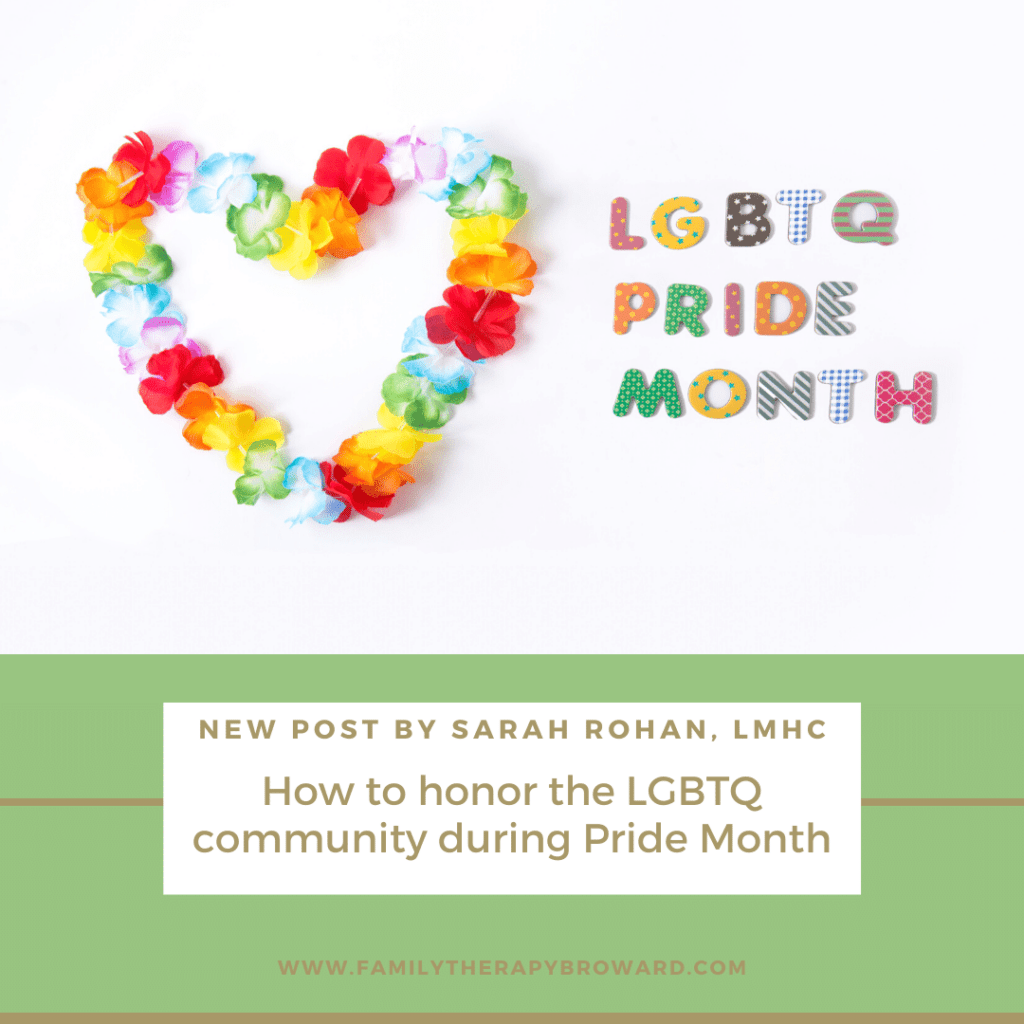 How to honor the LGBTQ community during Pride Month

Happy PRIDE Month! June is dedicated to the LGBTQ community and allies to celebrate and validate all the individuals who make up this diverse and vital community. This month’s celebrations include iconic rainbows, parades, concerts, rallies, workshops, LGBTQ small business support, and numerous celebratory venues across the country. These events are a fun and public way to show support for our LGBTQ friends, but there are other ways to understand and support this community.

PRIDE Month is celebrated in June to commemorate the Stonewall Inn raid which occurred on June 28, 1969, in Greenwich Village, New York City. Armed with a warrant, the police raided the gay club, manhandled the patrons, confiscated bootlegged liquor, and arrested thirteen people. Fed up with constant police harassment and social discrimination, the crowd began to throw bottles and bricks at the police; the protests and demonstrations lasted for five days. Although the Stonewall riot did not start the gay rights movement, it certainly helped to galvanize the growth of LGBTQ political activism. The one year anniversary of these events was marked with the first PRIDE parade.

Some ways to respect the identity of family and friends in the LGBTQ community and become a meaningful ally are to accept how they identify themselves. Additionally, respect how they choose to love and live their lives without judgement. Learn and use the correct chosen pronouns while accepting their self-expression through clothing, hair, and makeup, and other forms of expression. Do not pressure them to conform to social norms that oppose their beliefs and identity.

Don’t “Out” them without their permission

Individuals have the right to decide when they want to be ‘out’ regarding their sexual orientation and/or gender identity. The LGBTQ person may have several reasons for being out in some ways and not in others. If someone comes out to you as being part of the LGBTQ community, it is important to respect the person’s privacy; it is their right to decide when to come out to others.  The most important thing you can do is to let them know that you are there for them and you love and support them no matter how they identify.

Be Aware of Mental Health Concerns in LGBTQ community

Research shows that members of the LGBTQ community have high levels of anxiety, depression, substance abuse, and suicidal thoughts.  An alarming statistic is that 40% of transgender individuals report attempting suicide at one point in their life. Unfortunately, even though there are far more allies than ever before, members of the LGBTQ community still experience significant harassment and discrimination.  This community’s struggles with discrimination continues to impact their overall well-being and mental health.

There are several resources available to the LGBTQ community. Some of the resources include THE LGBT National Help Center, Trans Lifeline, The Trevor Project  and The National Center for Transgender Equality. Also, for anyone struggling in the community, please know your life has value and purpose beyond what you may feel or think right now, so please reach out to one of the resources above or call the National Suicide Prevention Lifeline at 1-800-273-8255.

There are several ways you can be an Ally to the LGBTQ community. One way you can do this is by educating yourself about the history of the LGBTQ community and the struggles they continue to face. Be open to understanding your loved ones’ experiences and how the world views and treats them. Don’t make assumptions about other’s sexuality and gender identity.  As an ally, when people use harmful jokes that target the LGBTQ community call them out and let them know they are offensive. It is important to be vocal and supportive of the community even when they are not present. Be willing to reflect on your own biases and/or prejudices and be willing to be wrong and work through these issues, if needed.  Donate to LGBTQ  organizations, buy products from their businesses, and possibly get involved in activism for the community. Lastly, celebrate with them at the parades, special events, and concerts and let them know that you love them for being unapologetically themselves !

During this month and throughout the year,  find ways to support your loved ones in the LGBTQ community. For many years, this community has lacked support in so many ways.  They deserve to be validated, supported, and valued as an integral part of our society. It is important to celebrate this PRIDE month by embracing and uplifting our LGBTQ community.

If you are struggling as part of the LGBTQ community,  we can help, please click here for more information.

I believe that our journey is filled with many unimaginable turns and twists. The key is to understand just how to deal with every single turn without losing our path. I know this first hand, not only from having relocated from a different country into the United States but also from having lived in different states from New York to New Jersey and finally Florida where I have settled with my family and children.